Our origin can be traced to 1980 when The Gisborne Madrigal Group gave its first performance. That was at the launching function for Gisborne’s Music ’81 campaign, a State government program to promote community-based music.

We pride ourselves on the quality of our work and on a broad repertoire covering great secular and sacred  choral music from the 16th Century to modern times, madrigals, American spirituals, popular music (especially at our annual Cabaret), the Best of British, as well as a huge range of Christmas Hymns and carols. 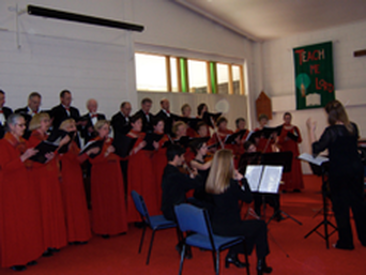 Barry Firth was the founding musical director and driving force from the choir’s inception, until his resignation in March 1996. For those interested in more detail, you can read Barry Firth's account of the origins of the choir, delivered at the 2015 Christmas party.

​Choir member Eric Willis took the helm from that time until his retirement in June 2004 and brought to the choir his love of Gilbert and Sullivan, Stephen Foster and Schubert.

Jane McGeorge had recently graduated from Melbourne Uni when she took over the director role in 2004. Jane injected infectious energy and youthful enthusiasm for two years before leaving in 2006 to pursue a singing career.

William Howard was fortuitously looking to contribute to the Gisborne community at that time, and with world renowned experience, we excelled under his directorship until 2008 when he was lured to a teaching appointment in Singapore. Thankfully, Bill’s friend and long time colleague, Stephen Brockman, stepped in to complete our performance of Mozart’s Requiem.

Under Stephen Brockman the choir grew in quality and numbers, and continued to perform more works with guest soloists and orchestra than ever before.  Stephen remained the director until 2020, and his last performance was at the end of 2019, since the COVID-19 pandemic of 2020 stopped all choir performances in that year.

Throughout the period (starting in 2009) that Stephen Brockman directed the choir, Alan Grinton was the accompanist (piano and multi-instrumented keyboard). Alan has enjoyed a lifetime of school and community musical productions and church choirs while variously working as a Victorian secondary schools music consultant and teacher, computer science lecturer, and Victorian TAFE information systems manager. Alan was a wonderful adjunct to The Gisborne Singers and also acted on several occasions as Musical Director.  His ability to accompany in a wide variety of styles and genres is truly amazing and the Choir valued his contributions enormously - following the passing of Stephen Brockman and the pandemic in 2020, Alan decided to step down as choir accompanist.

​In 2020, the choir grappled with not only the passing of Stephen Brockman, but also other cherished choir members.  It also, like all choirs, was severely  impacted by the pandemic.   In the latter part of 2020, the choir started to run some virtual choir sessions to re-establish contact and start to sing together again.

Starting in 2021, the choir welcomes its new director, Luke Severn and new accompanist Anna Clarke (whose skills the choir first experienced in 2015 at the annual Cabaret). 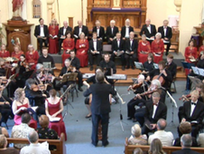 Since 1980, the choir has performed in and around the Macedon Ranges, from Sunbury to Kyneton, and also further afield from Dandenong, Ballarat, Bendigo and out to Echuca. We have performed in large city venues,  churches, community halls, hospitals and Nursing Homes, restaurants and shopping centres, and various town halls. In Melbourne, the choir has been seen at the RACV Club and the Victorian Arts Centre. We have performed in association with the The Ballarat Choral Society, the “Braemar College Choir, the City of Essendon Choral Society, The Faversham Singers, the Latvian Youth Choir, the Ormond College Choir, and with literally dozens of soloists and instrumentalists from the local community and beyond. Since 2006, our repertoire has expanded to include usually 2 major works per year with a full orchestra and guest soloists.

We have also been honoured to perform at charity and fundraising events in the local community. These have included the Royal Victorian Institute for the Blind, Alanna and Madeline Foundation, Local College Chaplaincy Funds,  the Victorian Open Garden Scheme and the Relay for Life.